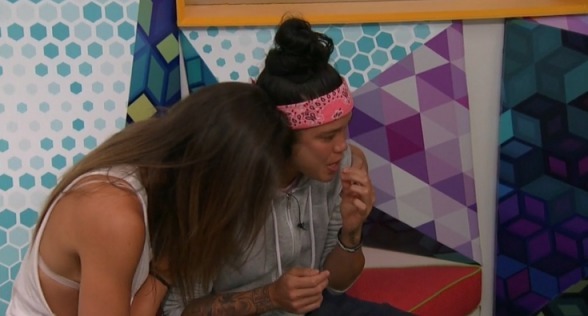 Well, looks like they are desperate for stuff to fill the episode tomorrow night as this is the first time in a while that they have pushed the veto meeting reveal to eviction night. You’d think the extremely slow week in the house would have caused this show to be like 20 minutes long, but the veto competition did take up a lot of time and that’s okay with me because it was great.

Whenever you hear the houseguests re-tell competitions, you only get a feel of what they’re talking about until you can actually see them play out. Watching Brett tear apart the house to cover his veto was absolutely hilarious. I didn’t realize that Fessy was about 3″ away from finding Brett’s veto before he had a chance to bury it.  I’m also glad I found out how coffee beans ended up in the stove, but still an odd choice. Why is Angela so bad at veto competitions? Or competitions in general? This was the girl who bragged in her CBS bio about being a freak athlete and loving to compete. The only comp she one was the trivia comp. While that’s impressive, you’d think someone of Angela’s freak athlete nature would come in more than near dead last in every comp she didn’t win. Even Scottie finishes 2nd or 3rd in the comps he doesn’t win.

I guess that just proves that these comps are more than physical or even mental. They’re sometimes just trick carnival-style games that some people just seem to be good at. Tyler’s obviously one of those people and Scottie is another. Fortunately for Tyler, his biggest competition rival will be walking out the door tomorrow night.

Alright, time for some updates!