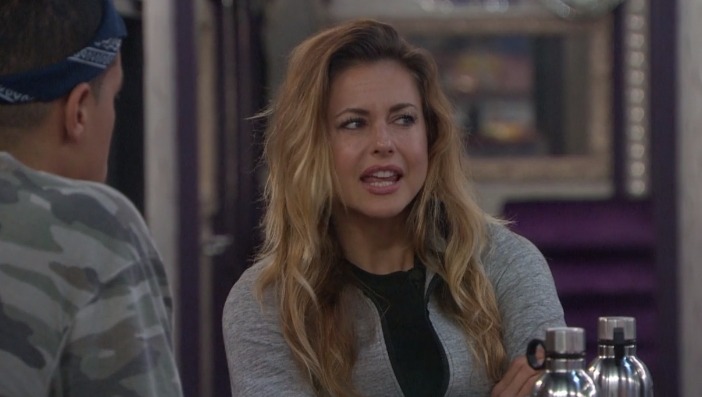 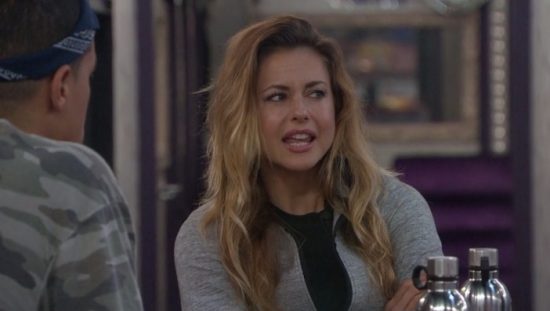 Before I get to the highlights from last night, I have some thoughts on Wednesday’s episode. Has Paul’s over acting hit a higher level? The over the top excitement when the show first came on and the fake crying are way too much! (His tears started when he got paranoid about being seen as the bad guy after his comic)  He fake cries AND fake laughs. I’ll be glad when I don’t have to hear “ehhh hehh hehh” anymore! (Sorry, don’t know how to spell that sound) I also don’t know who is a worse fake crier- Paul or Xmas.  Paul saying dramatically “I can’t help everyone, I can’t save everyone” while crying in the DR was ridiculous. Remember…the DR’s are for the viewers and not the jury! I’m not writing his ass a check so I don’t need all the dramatics!

I won’t even get started with Alex and the “spunky competitor who was wronged” edit. I’ll leave my fairwell comments about her with her own words this season which were “Paul can’t break his friendship because he can’t lie in front of America,” “friendship is his brand and it would totally destroy his fan base if he lied,” and “the friendship bracelets are the whole reason he came back this season.” Girl, bye to you and those stupid cat ears!

I admit I was anxious to hear Alex give her veto speech because I’ve been wondering why Paul was so butt hurt and what she said that was so terrible. It was just your basic guilt trip. He was making it sound like she was up there laying into his mother with insults or something. I also can’t decide which was more pathetic- Alex asking for AFP in her eviction speech or Paul asking for a jury vote in a good bye message. (Alex, I think)  They really are somewhat similar….except he plays BB and she doesn’t. I think Alex should have gotten to hear her good bye messages (for my own selfish reasons) since Julie ended up asking the hg’s questions at the end of the show to fill time. Maybe the hoh comp ended faster than they thought it would. (See, I can be fair) Was I the only one annoyed with Pauls fist pumping during the hoh comp? Is he hitting up Jersey Shore right after BB ends? I only ask because everything about Paul annoys me this year and I can acknowledge that so it could just be my issue.  Maybe I can find a support group after the season ends. (Hello, my name is Melissa and I can’t stand Paul) – Note from Steve: Only thing more annoying than Paul’s fist pump was Christmas doing it to root for him. At least he was winning the comp when he pumped his fist

Julie looked nice on the show and her black shirt was very cool while still being kind of bizarre. (not really a fan of asymmetrical necklines) I saw an interview where Julie talked about Les Moonves (her husband and head of CBS) coming home and telling her they weren’t going to negotiate with her and her attorney over her salary for Celebrity BB. He said she had to take less because it would be a shortened season. You know, just your typical husband and wife dinner conversation that we can all relate to right? Her attorney also happens to be her brother-in-law, Les Moonves brother. I think the interview was with THR but can’t remember for sure- it gave me a laugh. (My brother is a Chiropractor and my brother-in-law is my husband’s twin so I’ll be on my own if I need to negotiate something with the hubby. We’d only be hashing out who has to make the dinner anyway so I don’t suppose I’ll need council for that.)

Paul really did get screwed with his comic this year and it may be the worst one I can remember. I wonder how closely Xmas looked at hers because once she notices they gave her a camel toe, (sorry if that’s offensive to anyone but it’s true) she may not like it as much. That doesn’t happen on accident because you have to draw it on there!  I thought they nailed it by calling her a lunatic too. Kevin wasn’t impressed with being a merman/mermaid either. Ok, I’m rambling at this point so I’ll move on to the overnight update. There wasn’t much to it. Paul did a little talking to the camera so I’ll start with that. It’s always been my favorite part of the feeds with any house guest. Returning players and some new ones know they can use it for PR purposes to put a spin on things so sometimes you have to sift through a bit of BS but for the most part, it lets us know where their heads are at.  We didn’t need it very much this year because we already knew. Team Paul was where everyone was at with their strategy.

Jessica has been offering to give away fidget spinners for Cody votes. This girl has been campaigning hard. She was on Twitter last night telling everyone they had to have a paid account in order to vote. She’s the same person who posted her shock over Paul wanting to win the F4 hoh and said he should have waited to go for the F3 hoh so I’m not going to put much stock in what she says. (apparently she’s forgotten that he can play in both) There was some discussion about people being allowed to vote more than 20 times. I’ve read a lot of stuff saying that those votes won’t count and they’ll only count if you have a 20 vote limit but I dont know what’s accurate. There is confusion as to whether or not you have to have a paid CBS Access account or simply sign in with a regular CBS account using an email. If anyone gets to the bottom of this, please share the info. (I can’t imagine having to have a paid account to vote) I know there’s been times in the past when the voting was messed up and some votes didn’t count. Before anyone gets too worked up over the voting mix-ups, you should scroll down to the bottom of the voting page while you’re on it and click on Terms and Conditions. Once there, read section 5 called Additional Disclaimers. It’s too much to repeat on here but basically says if the computer program or voting gets messed up for any reason, they reserve the right to review the votes for accuracy and take appropriate action at their sole discretion. I’ll vote and I’m not discouraging you from voting. I’m just saying that we shouldn’t get too worked up over it if something isn’t working right. Speaking of program issues, it seems this site has had some random pop ups and things going on. I’m sure Steve’s working on it and he’ll have everything back to normal very soon if he doesnt already.  I’ll catch up with you guys this evening for the shocking/not shocking live show. If my only Thursday surprise will be what Julie is wearing, let’s hope she doesn’t disappoint! Have a great day!