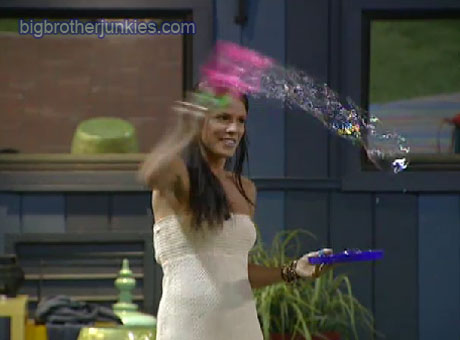 Wow, quite a week in the Big Brother house.  We had an elf running around, a wedding, lots of crying, a big shakeup, and rumors of a shrink visit and returning players.

First,  if you were following the CBS show, this blog, or the live feeds, you’d know by now that Daniele nominated Brendon and Rachel for eviction.  Brendon then (not shockingly with his competition) won the PoV, and decided to pretend all week that he was going to take himself off the block.   The shocking part is that he actually felt his trickery really made a bit of a difference.   I get that he’s going to medical school, but his arrogance is really getting the better of him this season.    Waiting until the last minute to pull a surprise move isn’t really that big of a deal when there is only one other option.  It’s not Survivor where you have a bunch of options to vote.. Danielle simply had to go into the PoV meeting with two options

It’s not difficult by any stretch of the imagination, but he felt his move was worth patting himself on the back over, so congrats to you, I guess?  You really showed them?

What CBS hasn’t really touched on yet was how Brendon and Rachel accepted their fate that Brendon is (likely) going home, so they did what they do best, still found a way to suck every minute of attention and put it on “Brenchal”.

Because we haven’t been sickened enough by their preteen behavior with each other in the house this summer, the pair decided to throw a mock wedding, and we were all invited!  Lucky us?  I covered the wedding in more detail in this post, and if I discuss it any more, I may honestly throw up in my mouth, so if you want pictures from it, visit the Wedding Post or the Awkward Bachelor Party Post.

And in even MORE Brendon and Rachel news (what am I going to blog about when they’re both gone?), last night Rachel was really breaking down about the thought of her FIANCE leaving, and Brendon apparently requested she be seen by a therapist.  They called her into the Diary Room for longer than a normal visit which speculated she got to see some help.  (No word yet if the therapist was promptly checked into a mental hospital after listening to Rachel for an hour).

Finally, in a fuck-up of CBS proportions, they decided to let the new twist out of the bag before the show aired.   Based on a screenshot from HamsterWatch, there is going to be a poll, likely tonight, asking who you want to see return in the house.

(The funny part is, even they expect Brendon to be evicted tonight)

I expect it should be an interesting vote, and I will probably put up on my poll on the sidebar when this blog is complete to see what you guys think.  I’m not scared about putting the carriages before the horse either, Brendon will be my 4th pick, not Jordan.

This one is so easy, I almost feel like I’m wasting time typing it…

Can Not Vote: Brendon, Jordan, Daniele

I am feeling a strength competition this week, or something that requires physical activity.   This instantly removes Lawon, Kalia, and Adam leaving:

Porsche will give up at some point, she’s still scarred from her nominations in week 1 for sticking on the banana for too long.
Jordan will fail, although give it a good effort

This comes down to Jeff, Rachel and Shelly.   I hate to say it, but Rachel will probably win because she has more motivation than she’s probably ever had.

My Thursday ramble is now done, however my whoring isn’t.  If you’d like to see the reaction to the new Head of Household, or their reaction when Julie tells them another twist is coming next week, sign up for the live feeds. In addition to that, here is what you also get: